A few postings ago I mentioned the Pinaud family in connection with the Coronation Cup challenger Cabot. Thanks to Neil F. Libbey I am able to add somewhat to the story. Libbey is descended from one of the early members of the Royal Cape Breton Yacht Club and has written a very interesting history of that club from its founding in 1093 up to the end of the Second Word War.  The Pinaud family is very much tied into the history of that club and has made an impact on sailing in the region.

In Libbey’s 2003 book, Portside, he states the following:

In 1906, Walter Pinaud and his brother, John (Jack) Pinaud, were lured from their native Charlottetown, to establish Pinaud Brothers Yacht Yard in Westmount [across the harbour from Sydney] to serve the needs of Club members. The Pinaud Brothers had received their early boat design and construction training under their father, Martin Pinaud, (1852-1907), who was born in France. He emigrated to P.E.I., and married Anna MacDonald of Scotchford, P.E.I. . The Pinauds has six children, John (Jack) in 1881, Angelena in 1882, Walter in 1885, Wilfred in 1889, Mary in 1895, Joseph in 1897, and F. Alphonse in 1899.

Martin Pinaud became a well-known Charlottetown boat builder and instructed his sons in the trade. John (Jack) also trained at the George F. Lawley Yards in Boston  and, in turn, instructed his younger brother Walter. After only a few years in Westmount, Jack Pinaud left the partnership to moved [sic] to the United States to work for an American boat building company leaving Walter to continue in the business on his own.

[There are a number of errors in the above account. The Pinauds were an Acadian family, long-time residents of P.E.I.  The reference to France is probably a mis reading of census data where the ancestry is noted as “French.” Martin was born in the Rustico area of Lot 24 about 1850 and was identified as a fisherman in 1881. By 1901 he and his family had moved to Charlottetown where he had a boat yard on Green Street.  Among other Charlottetown boats the Pinauds built the Micmac and the Vinco which dominated yacht racing in the early years of the twentieth century.   I am indebted to Peter Walker for initiating this clarification.]

Walter worked closely with RCBYC Commodore George H. Duggan to design boats for the Club and its members. With the increase in his reputation he became known to Alexander Graham Bell who was working on hydrofoil boats and was hired to run the boatyard at Bell Laboratories  near Baddeck.   Pinaud established his own yard in Baddeck in 1926 and designed and built both sail and power boats there with his sons Ralph and Fred  until his death in 1968.  The Charlottetown Yacht Club was home to a number of Pinaud boats including the Simmond’s family motor-sailer Nyanza and the Wanderer  which had been designed by Eldridge McInnis and built in the Pinaud yard in 1963.

Walter’s brother, Jack Pinaud, was probably designing yachts as early as 1901. In that year his father built a 30-footer described in the 2 May 1901 Guardian as “different from anything in the harbour”. Two years later Jack was living in Sydney and his father was building a yacht to his design for Walter Pinaud, Lawrence Gaudet and Augustus Aylyard. This was a centreboard sloop 36 feet 9 inches overall. The same year Jack delivered a gasoline yacht built for individuals in Sydney and Mitchell’s Book Store was displaying plans for a 38 foot auxiliary cruising yacht Jack had designed for Walter Crowe, ex-mayor of Sydney.

Meanwhile in Charlottetown Martin Pinaud continued to build yachts. In  1903 he was responsible for a centre-board sloop built for Gordon Hughes and John and George Lewis. The boat was 30 feet long overall and 18 feet on the waterline with a 9 foot beam. She carried 38 feet of canvas. The following year he launched the Hiawatha which had been designed by Jack. This was a large fin-keel boat with a centerboard giving a ten-foot keel, 33 feet overall with a 22 foot waterline.  She had a ten-foot cabin. The owners were Thomas Riggs, Aubrey White and W.N. Ducheman and was skippered by Walter Pinaud.  The Hiawatha was a fast boat and took the Hillsboro Boating Club trophy in three of the four years it was contested. The design of the Hiawatha and the Cabot was followed by the Berys built in 1906 by Martin Pinaud to Jack’s design for Walter Hall of Sydney.  The Guardian noted” She is of the skimming dish type such as Micmac and Cabot, but is not so near the scow type as the latter, having a well-pointed bow and easy bilges and is more suitable for comfort, not being intended principally for speed.”

Hillsboro Boating Club Trophy . Walter Pinaud at right. Note dog smoking a pipe, centre. This is probably the crew of the Hiawatha in 1906 when the Hiawatha won the Cup for the third time and retained the trophy.
Photo courtesy of Neil F. Libbey

By 1913 Jack Pinaud was in Boston associated with well-known designer John G. Alden and had designed another Coronation Cup contestant for a yachtsman in Cape Breton.  A later Pinaud-designed boat was the Pinaud (also called the P-No) named for her designer by Charlottetown owners Jack King and Arthur Campbell.  In 1925 she won the Wellner Cup, the J.O. Hyndman Cup and the B.Roy Holman Cup.  The Guardian noted that at the presentation ceremonies Pinaud “an old Charlottetown yachtsman” was in the audience and praised the work of the Charlottetown Yacht Club. 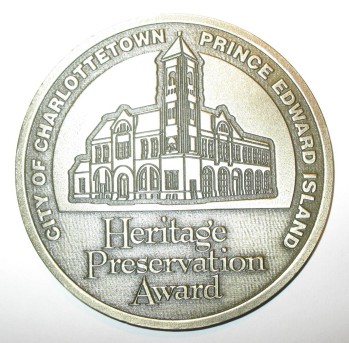 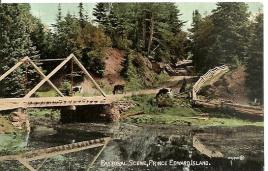 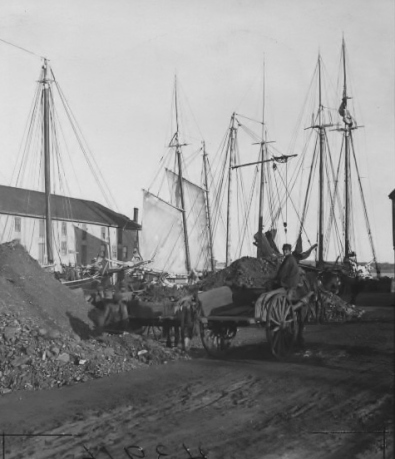