A new book has served up notice to me that it is all too easy to forget that history is a living thing. All too often when we think of “historic photos” the mind leaps to sepia toned images of top hatted gents stiffly posed or street scenes with strategically placed gas lamps. Charlottetown Then and Now is a corrective to that view. Compiled by Scott MacDonald using images taken by his father W. Blair MacDonald and brought to date with images of the same locations taken by Scott this is a wonderful little book.

Most of the “historic” photos in this volume date from the 1959 – 1980 period when Charlottetown was undergoing significant change. However that  change was scattered and to some extent gradual and the photos shock with the documentation of just how much change there has been and how easily it escapes notice.  We quickly forget what was there “before” and the new quickly becomes the familiar. When pressed many of us can remember Mills’ Meat Market on Hillsborough Street or Cudmore’s Grocery at the top of Upper Great George Street but we regularly pass by these spots today with nary a thought to what those buildings looked like.  Some have been replaced by other structures but a shocking number are the site of parking lots or parking garages.

We can point to the big changes such as Confederation Centre which filled Market Square and resulted in the disappearance of the Harris Library, the Shaw Building which meant the end of West Kent School and the Drill Hall (and Government Pond) and the Daniel MacDonald Building which stood on the site of a number of small businesses. However it is the other changes that really show up  how much the city has changed in a short period.

About a quarter of the photos are of Water Street and below and it is here that the most change can be seen. A whole class of businesses which once occupied the area have disappeared – businesses that belonged on the waterfront because of the shipping and later the railway access with the Lower Water Street spur extending to Pownal Street. Wholesalers like Deblois Brothers, Clark Fruit and Carvells, bulk goods sellers such as Phillips Feed Service and Pickard’s Coal Yard and what passed in Charlottetown for heavy industry – MacDonald – Rowe Woodworking and Bruce Stewart’s Foundry and Machine Shop. 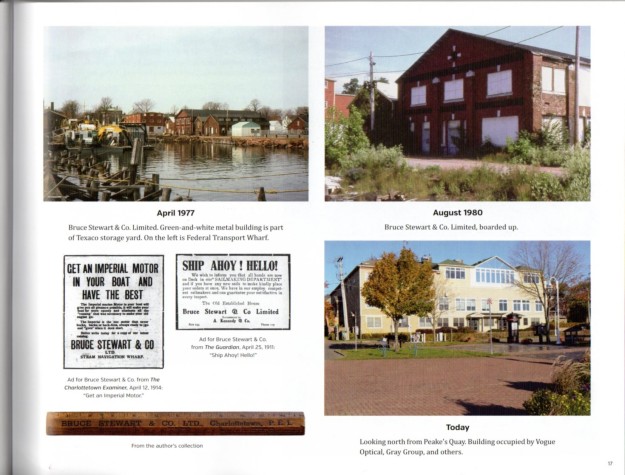 For those interested in the waterfront this book is a testament to how much has been lost. The whole Coast Guard / Department of Transport infrastructure which dated back to Confederation and which was the centre of port activity is now simply gone.  MacDonald senior’s pictures do not paint a pretty picture. The wharves are crumbling, the buildings unpainted and boarded up and the rail lines are rusted but as long as they were still in view the waterfront was real.  Now it is for the tourists and a somewhat ersatz presentation it is.

The pages contrast the then and now of each location with the occasional archival photo showing the area in the 19th century.  These 1970s and 2010s photos are good documentary records and Scott MacDonald has done his homework in identifying the buildings and businesses.

Away from the waterfront I was reminded by the photos of the large number of automobile related businesses that have either disappeared or moved out of the centre of town.  Car dealers such as Wendall Barbour on Euston Street and F.R. McLaine in Grafton Street, parts and service providers like Batt & MacRae next to MacLaine’s Plymouth dealership. Capital Auto on Kent Street and Whitlock Tire beside Holman’s Parking lot, and then there are the disappearing service stations – at the corner of Prince and Grafton, midway though the block across Queen Street from City Hall and across from the Law Courts and now the abandoned Shell Station at the corner of Great George and Euston.

The buildings which have disappeared often had a certain down-at-the-heel character and not all would have fired the architectural historians passions (although there was an unrecognized mid-19th century gem at the North East corner of Queen and Kent replaced by a nondescript commercial block now housing the Post Office).  To be fair, not all of the disappearances are from developer’s greed. The Queen Hotel and a row of buildings on Grafton Street are shown in flames and there a number of buildings which were abandoned and falling down.  However, the overall impression of the changes does not accrue to the creativity and sympathy of the architectural profession.

The volume is published by Acorn Press who have done much to help tell Island stories. It sells for $19.95.  Buy this book! 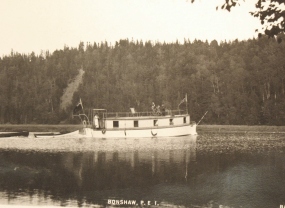