I have had a litre of Interlux Brightside Sea Green paint sitting on the shelf for a couple of weeks now and have resisted the temptation to crack the tin open. Yesterday the wait was over. I had given up on any hope of perfection in the sanding and fairing. The perfect is the enemy of the good and good is the enemy of the good enough! A couple of coats of primer or pre-coat and a final sanding and I was ready. Taping off the gunwales to protect from the guaranteed drips I approached the hull. 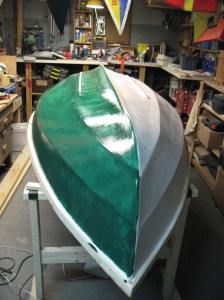 What a pleasure it is to get a glimpse of what the boat will finally look like. After mucking about with ratty old brushes which leave bits of foam or stray bristles that have to be picked off the surface (and are not infrequently missed until the next coat is applied) I dusted off my 4 inch roller and laid a thin coat on. Good paint is a pleasure to work with. It goes on smooth, doesn’t run, covers well dries in the time advertised. By this morning the finish, mottled and un-even, was ready for the second coat. A matter of minutes and the true colour emerges. Yes there are imperfections but no-one is going to look as closely as I do. I know where the bodies are buried: the little dimple of the filled stitching hole not quite flush, the little bubble in the epoxy, the stray fibreglass filament which escaped sanding. The second coat will be allowed to dry for two days and then a 220 grit sanding and the final coat of Sea Green. By then I hope that the interior paint (not Interlux) will have finally dried – after a week!

With the interior substantially complete and painted (although not without frustrations including a marked unwillingness of the paint to dry and my not being too pleased with the colour) it was time to turn the boat right side up and start the exterior finish.  With the first coat of primer or pre-coat as seen in the photos in this posting the usual crop of defects  not previously noted are now glaringly apparent.  I can’t even begin to approach the last few bits of fairing and sanding until the paint is completely dry lest the sander become completely clogged. Ergo day of rest. 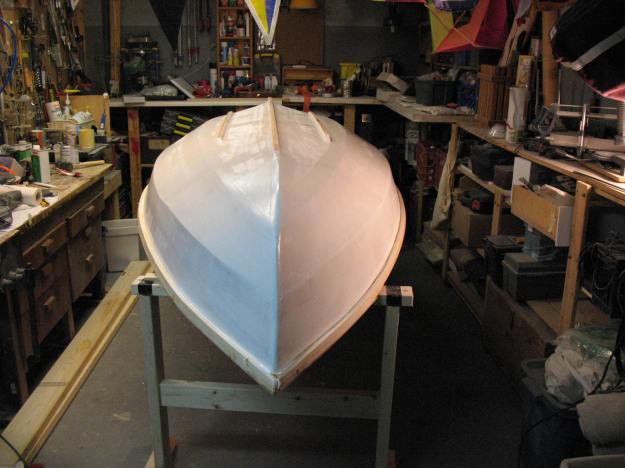 A lot has come together in the last day or so. Most of the egregious bumps and holes and spatters of epoxy have been sanded to a low-level of irritation and have been rendered less noticeable with several coats of primer paint (left-over house paint). Because I am slapping on the paint at this time I have used those cheap foam disposable brushes and you certainly get what you pay for. Each one is good for about one coat before it starts leaving little bits of foam all through the finish and has to be disposed of.

I have trial fitted the seat but not yet epoxied it in place. The plan suggests a plywood seat well braced beneath but I like the feel of a solid plank. It is a little wider than called for in the plan but I think it will fit me quite nicely. The rower’s seat will probably be the only one but I am considering a stern seat that can be slid in and out when needed and otherwise left ashore.

The bigger job was the sealing down of the compartments by fitting the deck. As can be seen from the number of clamps used the plywood did not take kindly to being wrapped around the curved bulkheads. As I noted earlier the foredeck had to be fabricated from two scrap pieces as I had previously snapped the last large bit of plywood in the shop. I have been generous, to say the least, with the epoxy and have probably marred the finish with a number of screw-holes but I have a fear that when I release the clamps tomorrow the decks will re-assume their natural flat shape with a loud twang.

Next tasks – epoxy the seat in place, a final sanding of the primer coats to remove the residue of foam brush and then the first of the interior painting. I have chosen a nice cream colour which should work well with the sea green of the hull. 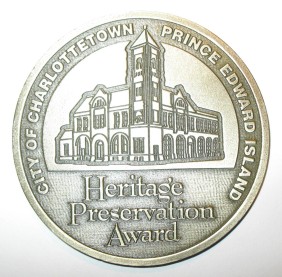 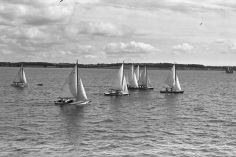