The Charlottetown Steam Navigation Company had a bit of a problem.  They had made substantial investment in a large new steamer, the S.S. Northumberland, in 1891.  However the seasonal nature of the Northumberland Strait trade meant that the vessel was usually tied up at dock for more than four months when the Strait froze. Even with reduced crew there were costs incurred in the winter months.  Moreover, even where the waters were not frozen trade in the region slowed during the period between November and April each year.

In 1895 the times seemed good for acquisition of another ship and the smaller S.S. Princess was ordered for addition to the fleet.  However, this would add to the lay-up costs and put additional pressure on the finances of the company. Then an opportunity came along. 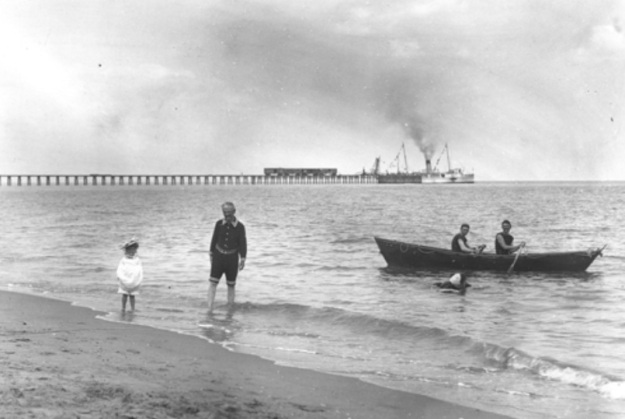 Beach and deep-water pier at Palm Beach ca. 1896. The vessel is likely the S.S. Northumberland. Note railway passenger cars on the pier.

Far to the south a dramatic change was occurring. New railroad lines were being driven across the swamp and scrublands of Florida to exploit the only resource that the area seemed to have at the time – its winter climate. The Florida railroad lines were dominated by two dynamic and competing individuals; Henry B. Plant and Henry Morrison Flagler. By the mid 1890s Plant had a line running from Jacksonville to Tampa with steamer service to Havana Cuba – a line which used the Olivette, a steamer which operated between Charlottetown and Halifax in summer. 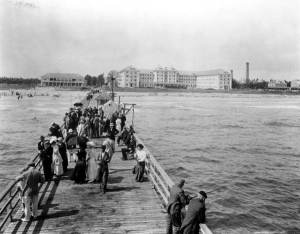 Palm Beach Inn from the pier ca. 1905 after the rail line had been removed and the pier re-built.

However, of the two men Flagler appeared to have the greatest dreams. He wanted a line running down the east Florida shore all the way to Key West and linking from there with Havana and the West Indies.  In 1893 his railway, the Florida East Coast line ran as far as Palm Beach and construction began on two huge hotels, the inland Royal Poinciana,  and the beachfront 400 room Palm Breach Inn by the Sea, later and still known as “the Breakers”.  He also acquired a number of hotels in Nassau Bahamas (then known as New Providence).  Flagler banked, with amazing forethought, on the increase in the winter tourist trade and for him the next logical step was to provide steamship service between the two areas.  Even before the Palm Beach Inn was completed Flagler had extended his rail line to the shore and built a 1,000 foot strengthened trestle pier with a rock-filled bulkhead at the pier-head to accommodate ocean-going vessels on the otherwise shallow coast. Owing to the deep-water pier, passengers could disembark directly from the trains onto the steamer for Nassau.

Incorporated as Florida East Coast Steamship Company, Flagler’s subsidiary company ran both the Florida-Bahamas Steamship line and the Key West and Miami Steamship Line. The Northumberland was chartered in the fall of 1895 as the first ship on the Nassau run.

In mid-November the Daily Patriot reported:”It is about settled that as soon as navigation here closes the steamer Northumberland will go south for the winter, to run as a passenger boat between Palm Beach Fla. and Nassau. Preparations are now being made to build a number of additional staterooms below the deck, to fit her with awnings, and otherwise put her in complete equipment for the new service.” 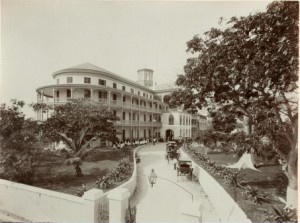 Royal Victorian Hotel, Nassau, New Providence about 1895. This hotel was also owned by Henry M. Flagler and was the destination of many of the Northumberland’s passengers.

Because the charter provided for passenger service only, the freight area between decks was hastily re-configured  as passenger cabins with removable partitions and the crew quarters re-located to the lowest deck beside the engine room. A stairway between the decks linking the two passenger areas was inserted.  The Northumberland ended the Strait service in early December, came to Charlottetown for renovations and then to the Halifax dry dock for hull cleaning and painting and then headed south.  With her Island crew she took up her new duties in mid-January 1896. It was only an overnight passage on the 150 mile route and the Northumberland provided a tri-weekly service reaching Nassau in time for breakfast.

The Northumberland continued service until the first of April when the winter tourist season had come to an end and she made her way north to take up her summer route. The charter was not renewed. By 1897 Flagler’s railway had been extended to Miami and a new hotel opened in that city. The route to Nassau now originated from Miami as it had a slightly shorter run and better port facilities.  The Palm Beach pier was rebuilt as a fishing and small boat pier about 1902 and survived until partially destroyed by a hurricane in 1928. Remains of the pier can still be seen in Google Earth views. Views of the present-day pier site can be found on the Palm Beach history page

The Northumberland does not appear to have any other winter charters and  stayed in northern waters for more than 20 years until sold in 1919. 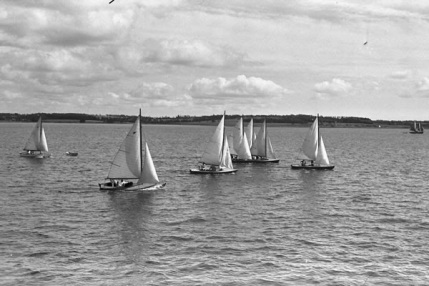 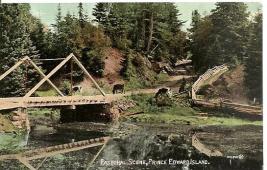