Early photo of the Princess of Wales in Charlottetown Harbour.  The building aft of the funnel is the Methodist Church. The steeple aft of the flag is St. Dunstan’s

In the last posting I wrote of the history of the second Steam navigation Company.   The creation of a P.E.I, company to take over the operation of the connection with the mainland was, for some, a great relief.  The steamer Westmorland apparently did not meet with universal favour but more of an irritant was the fact that the subsidy (grudgingly admitted to be necessary) was being paid to a New Brunswick company!  It was a matter of political concern and as such attracted the notice of the Island’s unofficial Poet Laureate.  We last met with John Lepage in connection with B.W.A. Sleigh’s Albatross scandal .  Included in his collection called the Island Minstrel Volume II is a long poem (and almost all of Lepage’s poems are long) titled “The Arrival of the Princess of Wales” which celebrates the appearance of the Company’s new ship in 1864. The poem describes the vessel and provides the political context.  Owing to length I have omitted several verses referring to the latter.  The full poem can be found in The Island Minstrel available here.

“Arrival of the “Princess of Wales”  – By John Lepage

Transatlantic, the popular title prevails,
And we in this Isle see our  “Princess of Wales”
A splendid new steamer, complete in details,
For the transit of passengers, luggage and mails.
Too long have we been,
What our neighbours call green,
Our improvident folly transparently seen,
Sending thousands abroad each consecutive year,
To pay for the use of  a steam-whistle dear!
……
And why should we not have a boat? let me see
Are we always to move in the second degree
Dependant on others? No! Certainly not;
Let us feed our own “sea-mews” with what we have got
New Brunswick has long had the lion’s own share
Of the cash which we Islanders poorly could share
To pay for her steamers; – I ask, was that fair?
Yes! so long as we could not do better elsewhere;
But now, when we can,
We encourage our clan
And challenge the mercantile world to a man
To censure – with fairness – our Government plan.
………..
So much for the Government. Now let us view
What enterprise properly Guided can do;
There, look at her now, Stern, midships and bow,
Did you ever! – just wait till I husk out my throat –
Did you ever behold such a duck of a boat
Why she sits like a swan on the water afloat
And before she is near
How plainly you hear;
For to warn of her coming, sonorous, not clear
she carries an engine that whistles by note.
………
Here are spacious saloons, well furnish’d and neat
With Brussels, and sideboards of marble complete,
and mirrors, through which you may look at your sweet
Pretty faces, and crinoline down to your feet!
Then the sleeping compartments! – just take a peep here –
Where ladies or gentlemen – consciences clear –
Might seek for repose and secure it as well,
As if in (No. 1) of the Astor Hotel;
Into which the crown Prince, of Old England might go
And dream of the “Princess” with pleasure –
“that’s so.”

Come wind up the log-line, my distance is run,
Let me frame but a toast and a wish – I’ll have done:
“A health to the captain,
A health to the crew,
A health to the passengers
many or few;
May prosperity follow the Company’s trade,
And a hundred per centum be honestly made;
May the “Princess of Wales”
long ride out the gales
and especially be, in Port or at Sea,
at home and abroad,
Beneath the Almighty protection of God.” 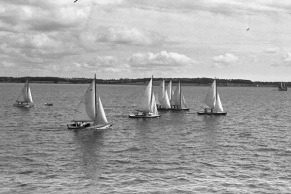 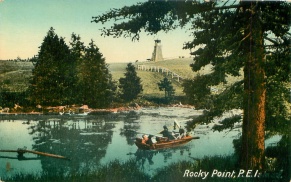 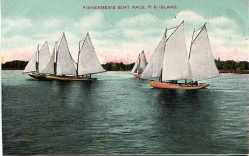 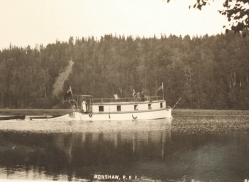