Although after the middle of the 19th century there were a number of Island-owned steamships plying the routes between the Island and the mainland and up and down the Island estuaries only one serious attempt was made to translate the Island sail-borne trading experience to the world of the steamer on an international scale.

In 1871 the Ocean Steamship Company of Prince Edward Island was created following a public meeting where most of the shares were enthusiastically subscribed, many by members of Charlottetown’s Peake family who became the managers for the venture. The meeting agreed that “in these days of progress we should avail ourselves of the advantages of Ocean Steamers, in order to keep pace with the neighboring Provinces, and supply the urgent wants of our enterprising merchants; and also with a view of exporting a larger  amount of produce from this country.”  The new firm placed an order with Napier and Sons of Glasgow for an iron steamer to travel between Liverpool and Charlottetown. The S.S.Prince Edward was launched from the Aitken and Mansel shipyard on the Clyde in October of 1872. At 1365 tons and 253 feet and driven by a  170 horsepower, 2 cylinder steam engine turning a single propeller she was certainly capable of service across the Atlantic.  The final cost of the vessel was £26,865 sterling with another £2095 for fit-out.  This represented about $150,000 at the time and almost $3 million in todays funds and was a serious investment for the merchants of the small colony. British newspapers hinted that there would be additional ships added to the line, presumably dependant on the success of the venture.

The Prince Edward completed its maiden voyage and arrived in Charlottetown on 1 May 1873, taking a respectable 12 days from Liverpool, being delayed by ice only one day. In addition to general cargo and a full complement of passengers the ship carried no fewer than seven locomotives for the Prince Edward Island Railway, then just beginning construction. Several Charlottetown merchants took advantage of the arrival to advertise “new spring goods” per the Prince Edward. The return voyage was to Cardiff Wales and newspapers there noted that this was the first steamer to load at Prince Edward Island. She carried 65,000 bushels of oats, other produce and a few passengers.

As had been the case with the Island’s wooden sailing vessels the Prince Edward was  never intended to simply shuttle between the Island and Liverpool, especially during the winter season when the Island port was closed by ice. It went wherever cargos took it, crisscrossing the Atlantic to several Canadian and American ports, Liverpool, Bristol and even to South America but as an Island-owned ship she was a regular caller at Charlottetown.  As Boyde Beck’s article on the Prince Edward published in The Island Magazine #30 (Fall/Winter 1991) [available here] points out, the vessel may have been profitable initially but over the years it became less so and the initial cost of the ship had to be factored into the owner’s calculations.  Records in the Welsh and Owen shipping papers at the PEI Public Archives and Records Office give a couple of snapshot glimpses of the ship’s later years. 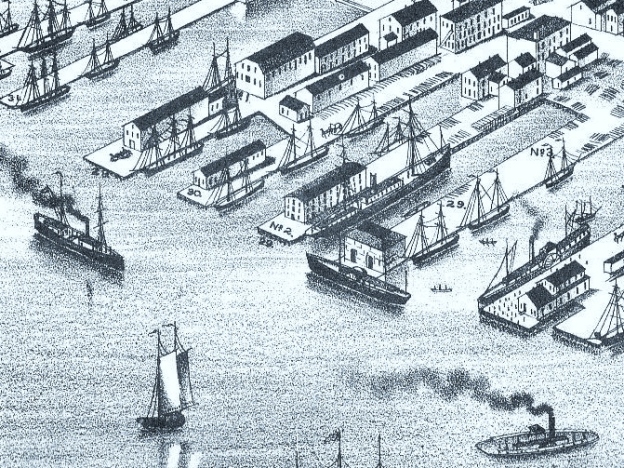 Although not specifically identified as such, the steamer at Peake’s #2 wharf in Ruger’s 1878 birds eye view of Charlottetown is likely the Prince Edward. No photos are known to exist.

In the 7th annual report of the company dated March 1880 it was noted that it had been a good year. A condenser for fresh water had been added to the ship’s equipment allowing for deck cargos of sheep and cattle to be carried across the Atlantic. The ship had made trips from New Orleans to Liverpool, to Charlottetown, to Newport (Wales) to Charlottetown, to Montreal, to Liverpool, to Charlottetown and back to Liverpool.   The profit on operations was $16,000 (an increase of almost $11,000 over 1878) and the holders of the 59 shares were paid $100 per share which represented about a 4% return on the original costs. 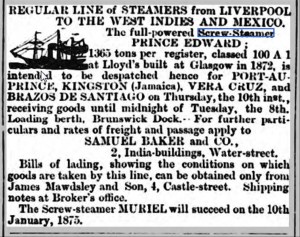 The following year saw more trips from Montreal to Liverpool and voyages to New Orleans, Bristol, Baltimore  and Charlottetown. Although net earnings remained at the $16,000 level two dividends of $150 were paid representing a return of about 10%. However the following year (1881) was somewhat of a disaster. The ship did receive a subsidy of $6,000 from the Dominion Government for carrying cattle, sheep and other Island products overseas but there was increased competition and on a November trip from Liverpool severe weather resulted in the Prince Edward running out of coal in mid-ocean. She had to be towed to St. John’s. Profits dropped to half of the previous year.

In 1882 there seem to have been only two trips for the Prince Edward: Liverpool to Charlottetown in May and Charlottetown to Bordeaux France in June.  The firm’s English agents were instructed to put the ship on the market.  She did not return to the Island and she was sold to the French firm of Caillot & Saint Pierre in Marseille. They changed her name from Prince Edward to Senegal but the ship was wrecked on the coast of Spain later that same year.

Although created in the optimism of a pre-Confederation PEI the Ocean Steamship Company could not survive the changing times and was wound-up.  The Island’s trans-Atlantic trade gradually diminished and passed to other hands. 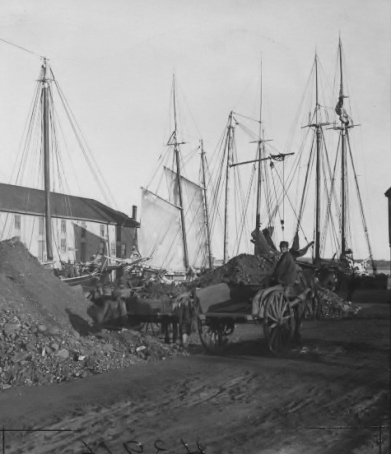 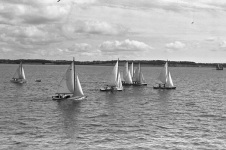 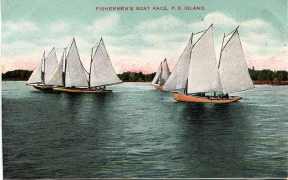 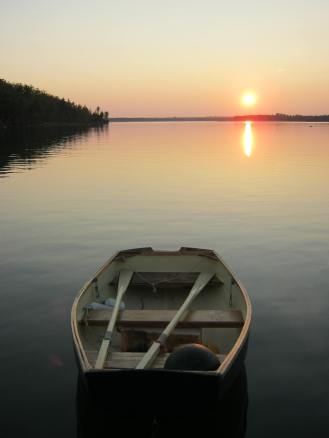 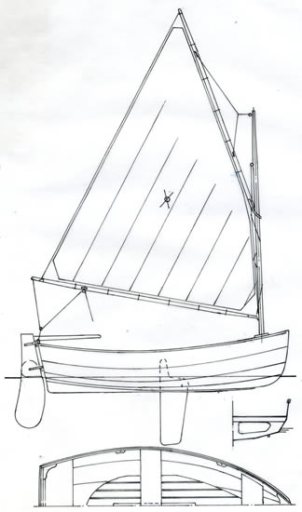 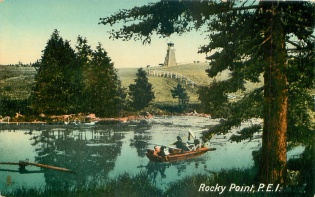 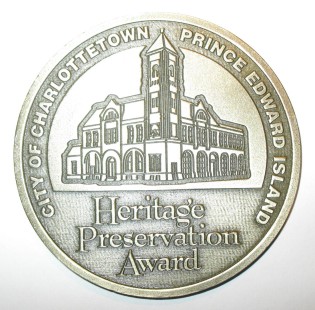 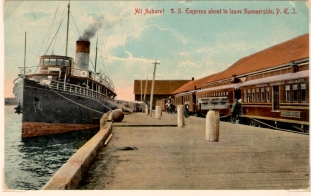 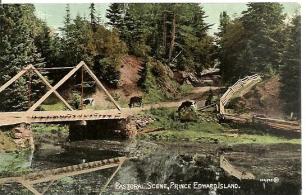